Reveals about the relation between Leiden cloth and slavery

Research by Museum De Lakenhal into the letters between cloth merchant Daniel van Eijs and his assistant shows how an eighteenth-century Leiden entrepreneur thought about slavery. His story shows how directly the history of slavery and Leiden are connected. Some suffered terribly under this system, while others profited from it. This is the story of Daniel van Eijs and the people who worked on the plantations.

This text is based on research by Sjoerd Ramackers, third-year bachelor student of history, for Leiden University and Museum De Lakenhal. For this research, Ramackers read and transcribed more than 1300 letters from the digitised archives of Erfgoed Leiden en Omstreken.

The collapse of the Leiden textile industry in the eighteenth century led to investments in the plantation economy, this research shows. With money from Leiden, obtained from the cloth trade, people on the other side of the world were bought, tortured and dehumanised. This story forms an extra page in the history of the Leiden cloth industry in the eighteenth century.

Over a different tack

Daniel van Eijs (1688-1739) was a Leiden cloth merchant and manufacturer. Until the seventeenth century, Leiden cloth was a major source of income for dyers, merchants and manufacturers of the luxury fabric. With the advent of cheaper fabrics, demand declined rapidly around 1725. Until now, it was thought that many merchants stopped working at this time and started investing. The story of Daniel van Eijs paints a different picture for the first time.

The Leiden cloth merchant did not have the luxury of retiring. He therefore decided to take a different approach. Together with three family members, he bought four plantations in Berbice, a Dutch colony on the north coast of South America, in 1735.

Berbice was located in present-day Guyana, next to Suriname. In the 17th and 18th centuries, this area was a Dutch colony. This colony was part of Dutch Guiana and was situated along the Rio de Berbice. It was one of the oldest colonies of the Dutch Republic. Since 1720, this colony was in the hands of the Amsterdam Society of Berbice. In 1735 this gave permission for the four plantations of Leiden cloth merchant Daniel van Eijs to be founded.

The plantations in Berbice were so large that the inner city of Leiden could fit into them. They stretched across a land of swamps and sand hills, in straight lines through the rainforest. The new owners called the plantations Klein Poelgeest and Groot Poelgeest. The other two pieces of land were called Abigaël and Magdalena. They were named after important women in Van Eijs' life. Both the mother and daughter of Daniel van Eijs were called Magdalena. The plantation Abigaël was named after the wife of Johan Nicolaas van Eijs, one of the brothers with whom Daniel bought the pieces of land.

The names Klein and Groot Poelgeest most likely have a Leiden origin as well. The name Klein Poelgeest comes from the castle of Captain Dirk Roos near Koudekerk aan den Rijn, Daniel's brother-in-law and co-owner of the plantations. There may also have been a connection with the Leiden estate Oud Poelgeest, where family member Herman Boerhaave lived. Boerhaave was a doctor, rector magnificus and chemist as well as a botanist. Through his cousin Daniel van Eijs, he wrote two letters to the plantations. In them, he asked for seeds and fruits to be planted on his estate Oud-Poelgeest.

Life on the plantation

Gordian Teller, for ten years Daniel van Eijs' right-hand man in the Leiden cloth factory, was sent to Berbice to take charge of the daily management. He set foot on 4 May 1735, after a two-month passage by ship. Together with Gillis Mentz, presumably a cousin of Daniel, and Lourens van Weeninge, another known Dutchman, he immediately started looking for suitable land to establish plantations. They found it deep inland, at the Berbice river. Mentz became director of Klein Poelgeest, Teller of Groot Poelgeest.

Eighteen of the letters that Teller and Mentz sent to Van Eijs have been preserved. The letters provide a rare glimpse into the setting up of a slave plantation. The two men write about their fear of snakes and tigers and complain about the lack of wine and beer. They also correspond about the work. At first, they do most of the work themselves: together with a few enslaved people, they cut down the old trees and plant tobacco, cocoa, cotton and coffee in return. They carry out this heavy work under the hot sun, whereby they are plagued by insects. Or, as they wrote in the eighteenth century, where 'the little fly contributes so eloquently that the eye can hardly see'. In their letters, Mentz, Teller and Van Weeninge were told to 'help like a Negro'. It shows the inequality of the time: the three did work that, according to the prevailing views at the time, only a black person should do. 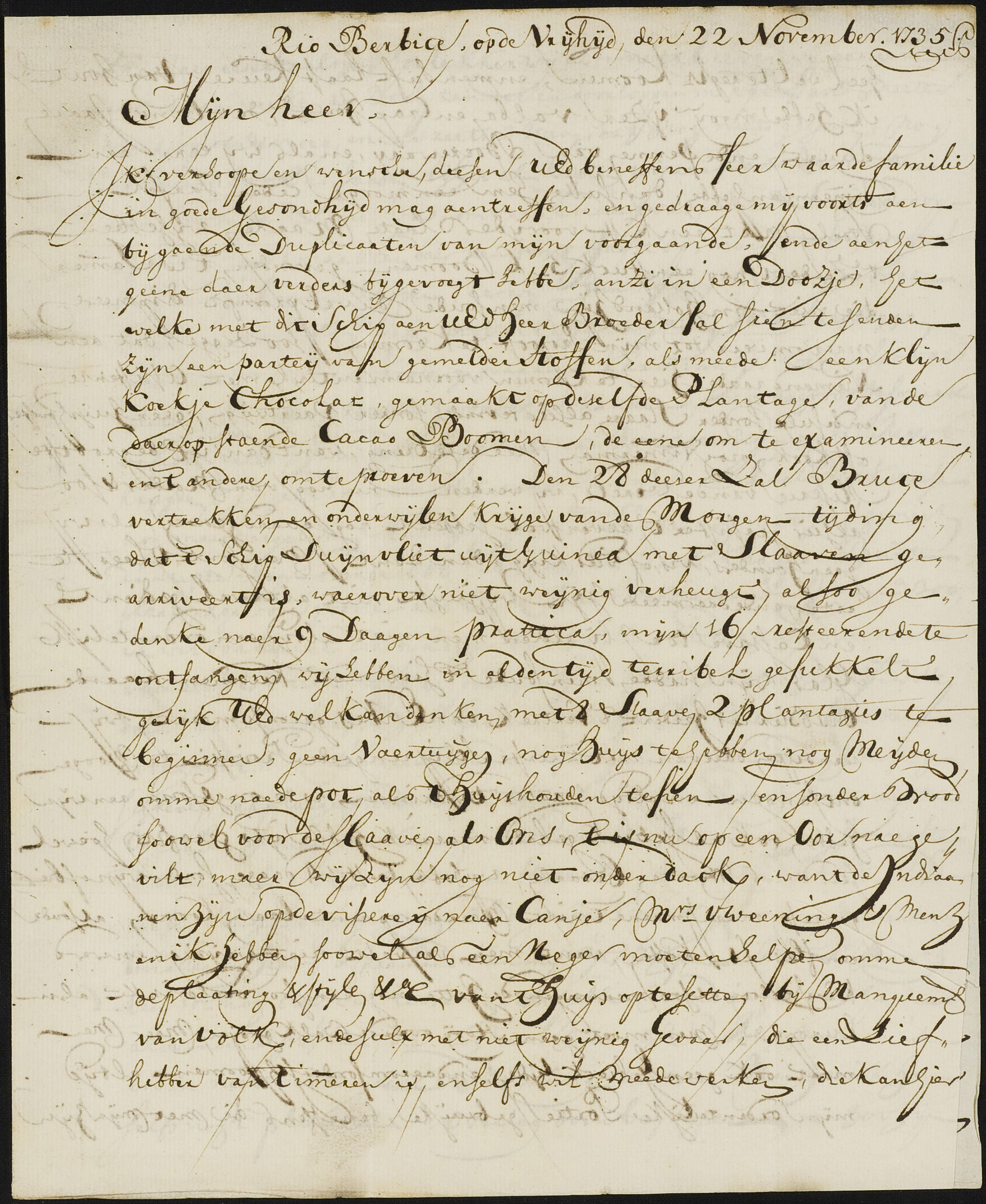 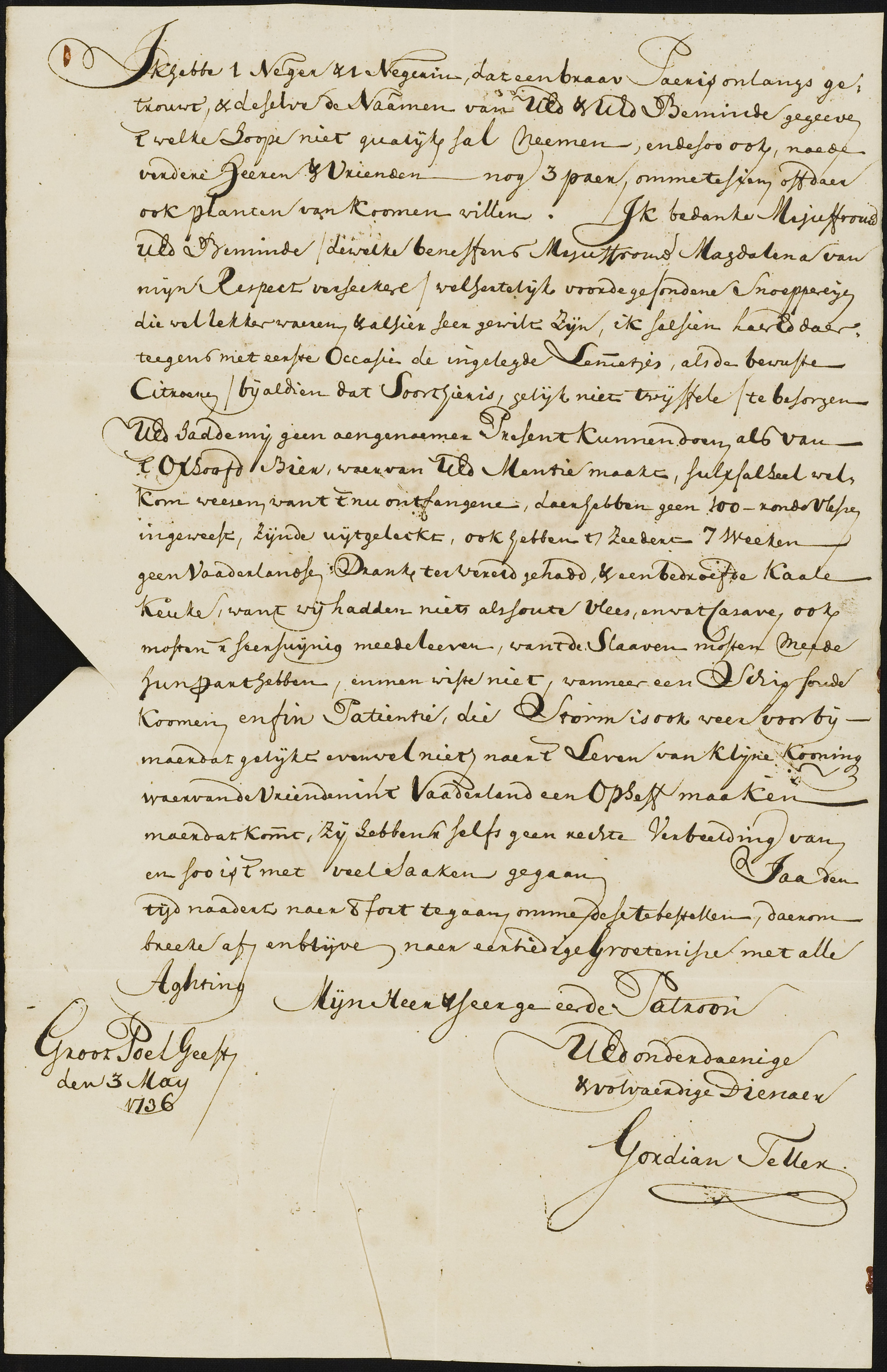 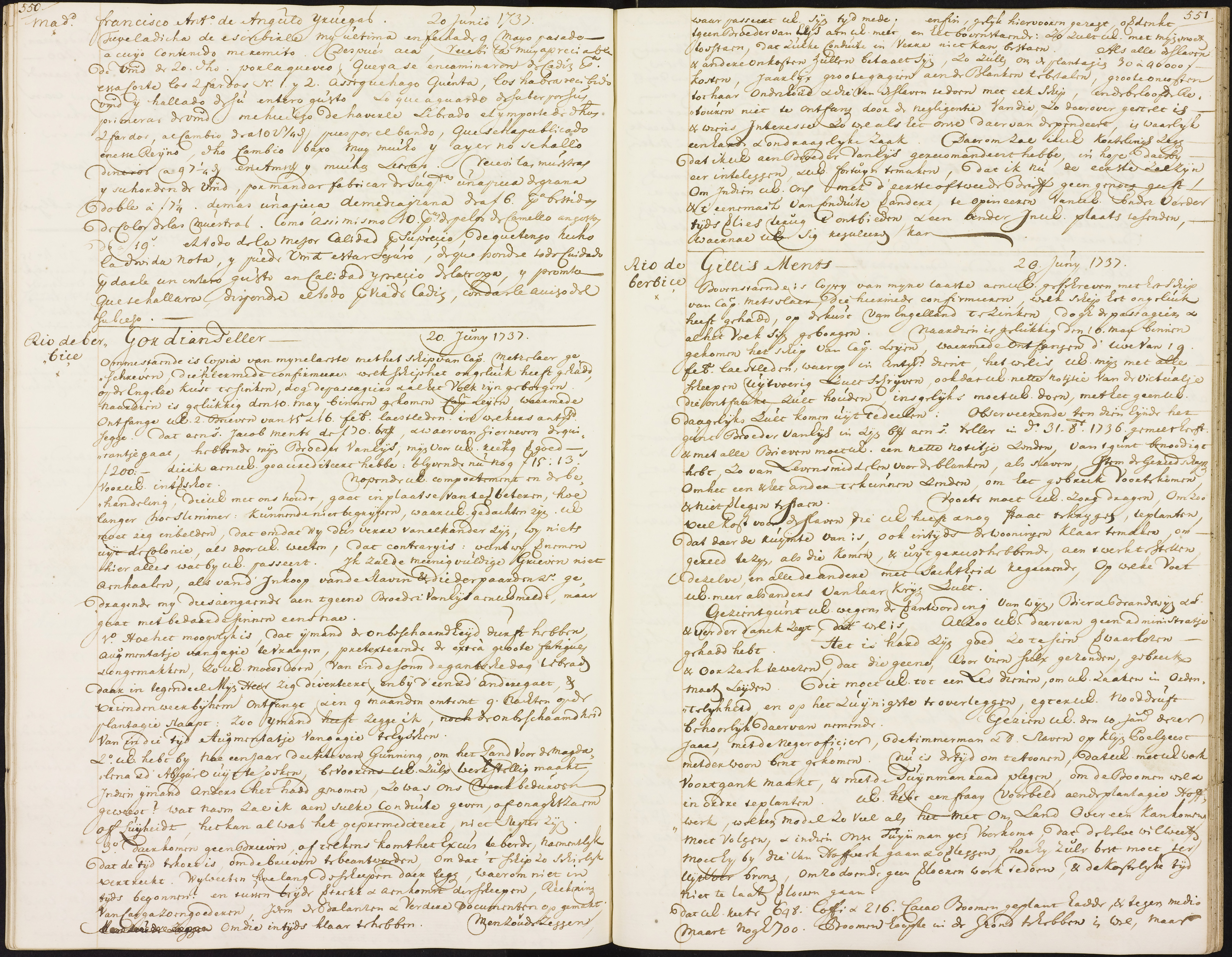 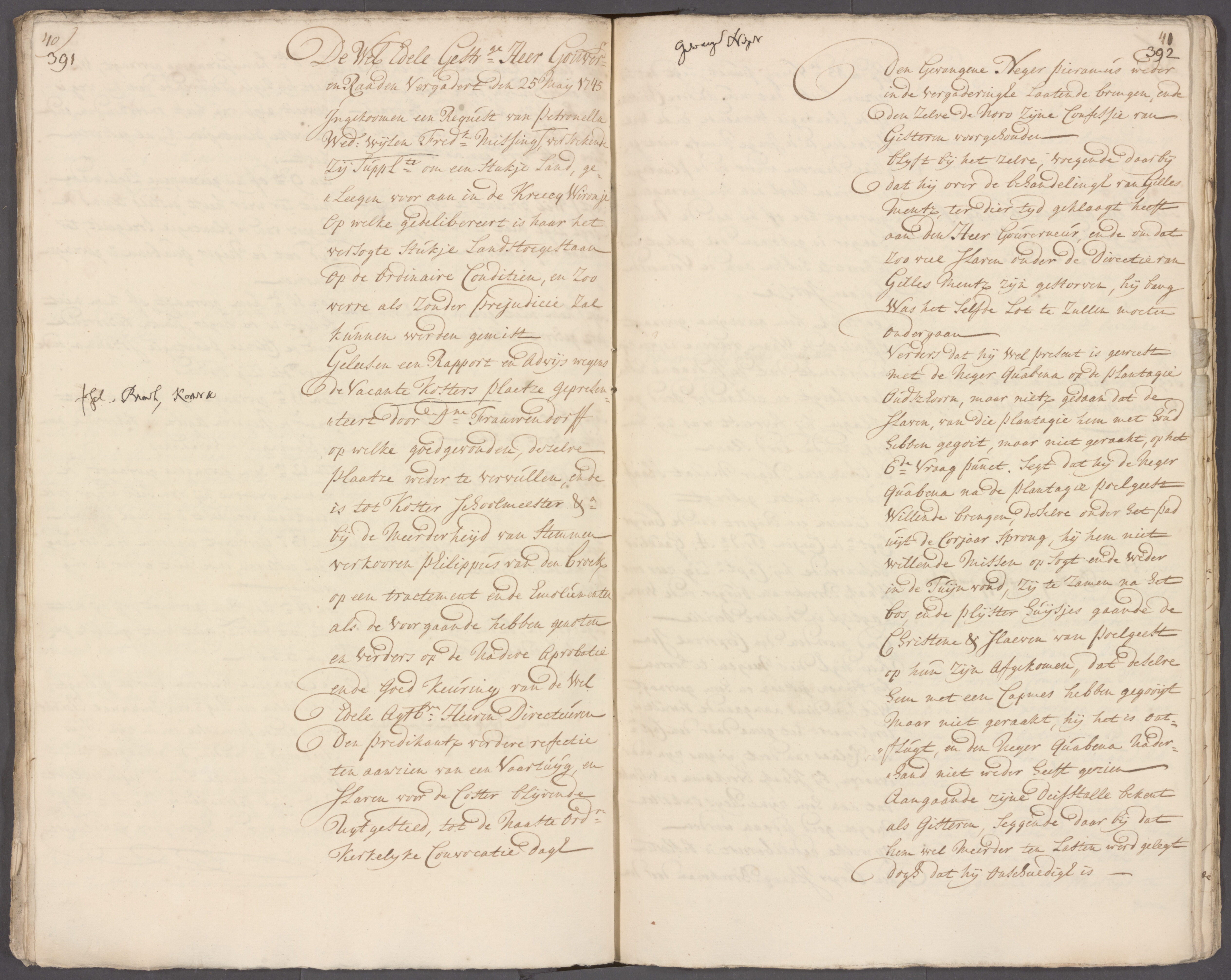 The plantations, once laid out, had to be well maintained. From 1735 to 1739, at least 126 enslaved people lived on these plantations. Unfortunately, we know very little about them: they did not write down their stories or these have not been preserved. What we do know is that enslaved people often came from Africa, although some were indigenous. The fixed price per person in Berbice in those days was 275 guilders. Except for children, as this letter from Teller about the purchase of the boy Majalla shows.

Slavery was more than forced labour: the entire body of an enslaved person was a means of production for the owner. In the early stages of the plantations, when Teller had few people available, he decided to marry four men and four women. Teller named a couple after the plantation owners: Daniel van Eijs and his wife Sara Dozij. The hope was that they would have children, who could later work for him.

From his stately home on Oude Singel, Daniel van Eijs wrote about the enslaved. He often made the distinction between 'Christians and slaves'. Once he even wrote about 'people and slaves'. In Daniel's view, the latter were simply a means of production. They had to be ruled with 'gentleness', because then they would yield more.

Traces of slavery in the cloth trade

The cloth industry itself was also linked to slavery. Dyes such as indigo and cochineal were used to dye the sheets. These plants were grown on plantations in the East and West. Afterwards the sheets ended up in the ships of the Dutch East India Company (Verenigde Oost-Indische Compagnie or VOC). They used the sheets as gifts to local rulers. Recent research has shown that in 1714 and 1715 the West India Company (WIC) often 'paid' with sheets. Half of the slaves they bought in those years were exchanged for sheets. Especially for the West African market, the Leiden people made 'Annabas', an imitation of an African fabric.

This painting is an allegory, a symbolic representation, of the wealth created by the cloth trade. The woman in the middle symbolises the city of Leiden. She is supported by a black boy, who symbolises the continent of Africa. His presence shows that people were already aware of the importance of trade in West Africa to the economy.

The text continues below the image.

Burned into the skin

The enslaved people on the plantations probably did not notice much of this 'roughness' themselves. The heavy-handed treatment already started upon their arrival in the colony, where they got the letters CB (Colonie Berbice) burnt into their skin.

On Van Eijs' plantations, too, things were tough. Pieramus, for example, a man enslaved, said he had run away from the Klein Poelgeest plantation because of the poor living conditions. After Pieramus himself bought fish from the indigenous population, because Mentz did not give him any food, Mentz decided to tie him up and beat him.

The governor, the colony's highest executive, stated that he was 'convinced of the barbaric treatment of Gilles Mentz over his slaves'. This ensured that Pieramus was spared the death penalty by radbraking. This is a gruesome torture in which someone is first tied to a wheel, after which his arms and legs are broken. If you were lucky, you finally got a mercy killing on the chest. Instead of this punishment, the board decided to 'merely' cut off Pieramus' ears and sell him to English traders.

The end of Gilles Mentz

With Gilles Mentz himself things did not end well either. He finally left the plantations of the Van Eijs family and founded his own plantation, Boslust. There he was murdered at the end of March 1746 by three men: Cacao, Abraham and Hans. The three had fled from another plantation in search of food. According to Abraham and Hans, Cocoa came up with the plan. First they would shout loudly, and Mentz would come out. Then they would ask him for food. If he did not give it, they would stab him to death.

And so it happened. According to Hans, Abraham would have stuck a knife so deep into Mentz's stomach that it would not have come out. Cocoa is said to have cut his throat. In the end, all three men were sentenced to death. Cocoa received the worst variant: he was sentenced to be burned alive. Abraham was disemboweled, after which his head was chopped off. Hans, after all his confessions, was 'only' burned.